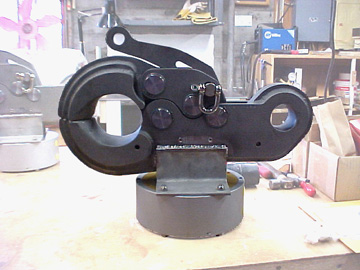 McMillan Design, Inc. has been prompted to study and implement alternative methods for releasing the Sea Catch. The methods currently available and in use are as follows:

1. Manually, pulling a long release line. No modification of the Sea Catch is required. This method is used with lower capacity models, offers the lowest cost, and has many satisfied users.

2. Hydraulically, using a winch and cable, such as used with a deck-mounted crane, to pay out the load against a secured release line. No modification of the Sea Catch is required for this method.

3. Hydraulically, paying out the load against a fixed-length, bulkhead-mounted release cable. Using a clevis instead of a shackle, a bulkhead-mounted hydraulic ram is attached to the rear end of the horizontally positioned Sea Catch to pull it back after the unit is locked. The release cable is then secured to the bulkhead and when release is desired, the hydraulic ram is actuated, allowing the Sea Catch to move toward the load and eventually against the secured release cable and the load releases the unit. This method allows the installment of a pressure gauge into the hydraulic system to determine the actual tensile load being released. No modification of the Sea Catch is required. Sea Catch TR18s are currently being used in this manor for push tug applications.

6. Hydraulic pressure to drive a hydraulic cylinder to actuate the release lever of the Sea Catch is being used with the Sea Catch RAM models. These units can be activated by hydraulic hand pump, air-hydraulic foot pump, or electric pump. Call for details.

7. Air cylinders provide another method of release and are fitted to Sea Catch AIR models including the TR3AIR, TR5AIR, TR7AIR, and TR10AIR for activation using shop air at 60 to 100 PSI. Call for details.

The best approach in designing a low-cost alternative release system for any particular application is to provide McMillan Design with the following details:

-Which methods are best suited to the application and what are the available energy sources?
-Is the load being dropped vertically or is the load released horizontally?
-Must the system be totally remote controlled or can lines, wires or hoses be used at the site?
-What is the preferred distance between the Sea Catch and the technician activating the system?