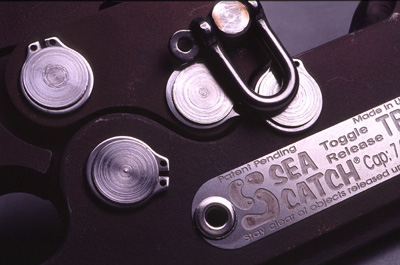 Device locking: Having secured the recommended shackle to the rear end of the Sea Catch, open the jaw by removing the hitch pin and prying up the release lever and opening it to the released position. Insert the pin of the shackle to be released into the jaw opening. Secure the shackle by closing the release lever to the locked position and firmly lock the toggle pin over center with a vice-grip-like snap.  The shackle is now held firmly locked even with no load on the device. The hitch pin can be reinserted to prevent inadvertent release. The Sea Catch is now ready to be loaded. Once the hitch pin is removed, the Sea Catch is armed and ready to be released.

Device releasing: Release of the loaded Sea Catch is activated by first removing the hitch pin and then pulling firmly on a release line connected to the end of the release lever. The release line can be activated in any direction within the 90 degrees perpendicular and parallel to the line of load. Alternative release methods are discussed on another page. The use of the hitch pin is not required to secure the device in the locked position. It is an added safety measure preventing inadvertent release. A hitch pin is provided with each unit.

The required effort to pull the lanyard of the TR7 to release a capacity load of 7,042 pounds is around 40 pounds. The release effort of all Sea Catch models is provided on another page.

-Improper use and improper care of the Sea Catch device may cause injury.

-Hitch-pin must be used to prevent inadvertent release.

-Do not use the Sea Catch release line as a tag line or put any tension on it until time to release. An additional tag line secured to the upper shackle and kept taught at all times is highly recommended to maintain a slack release line and prevent load twisting.

-Stay clear of all objects released under load.

-Do not exceed load capacity of this device.

-Choose the proper size Sea Catch so that it is not loaded with or releasing more than its rated load.

-Do not side load the Sea Catch as it may cause loss of retainer rings and other parts or permanently damage the device.

-While in its loaded position, do not obstruct the Sea Catch so as to prevent its body being aligned straight with the line of load. Misalignment may prevent the movable jaw from releasing the connected member even with the device in the released position. Alterations to the Sea Catch by way of cutting, welding, and/or grinding voids the unit load rating and product warranty.

-Do not mount the Sea Catch such that the mounting fixture damages the unit while in use. This could cause loss of parts and unit malfunction.

-Inspection of the Sea Catch device is advised after each use.

-Should the device be held in a static state under load, inspection should occur every 3-6 months depending on the severity of its corrosive environment.

-Ensure every retainer ring is free of corrosion, properly installed and securely seated in its groove. Corroded retainer rings are an early sign of improper care.

-While in use in heavy marine environments or stored for long periods, a quick fresh water rinse and a coating of WD40 or other suitable corrosion retardant is advised.

-Always store the device in its closed and locked position.

-Pivot pins may require periodic re-lubrication. AQUALUBE is recommended for general marine use. -Higher capacity models such as the TR15 and up require a NLGI #2.5 grease with moly added such as the McMaster-Carr item #1335K45. Pivot pin diameters and lengths can vary, therefore each pin must be marked and returned to its original hole.

-Should the device become “soft” (little or no effort to open or close it), it is unsafe to use and should be returned to McMillan Design for a refurbishment which includes surface cleaning, attending to any issue with function (replacement parts are added costs) and re-lubrication.

-Static Load: Forces solely due to the weight or gravity of objects being handled.

-Dynamic Load: A load created by motion of the object that increases or decreases the static load.

-Hydrodynamic Load: A load resulting from motion through the water including lift and drag.

-Inertial Load: A load resulting from accelerated releasing caused by tension on the object that is greater than gravity.

-Total Load: The sum of all above loads or forces acting on the object.

-Product feedback is encouraged and welcomed as are emailed jpg photos of Sea Catches in use.